The GIS Unit has a well established research track record in pure and applied geoscience research. As part of its work examining geographical variation in a range of public and private services, GIS has worked with organisations including Sport Wales, the Care and Social Services Inspectorate Wales, the Welsh Government’s Knowledge and Analytical Services and Department for Economy, Skills and Natural Resources divisions, and Tenovus Cancer Care.

Notable progress has been made in the following areas:

"Few of us have not been touched in some way by the impacts of cancer. Therefore, this research has been particularly rewarding given the need to reduce the distances involved to get treatment and advice," said Professor Higgs.

"The benefits for patients at a particularly stressful time are clear – more convenient and accessible locations for treatment and environmental benefits in terms of reduced miles travelled."

The user-friendly tools enable planners to monitor the availability of public services in relation to current and future trends in social conditions, and to examine the impact of further trends in service provision.

The research has helped Welsh Government and Sports Wales to support policies geared towards the social processes involved in accessing services.

Our GIS drone research team has collaborated with a number of local clients and organisations focusing on the use of unmanned aerial vehicles (UAV) for high accuracy surveying, mapping and photography. The use of drones for GIS surveying provides a cost effective method of undertaking land surveys without the need for satellite imagery or manned aircraft. Surveying by drone also means that flying closer to the ground provides a much higher resolution and higher accuracy in the data being captured. Drone surveys can also be carried out much more quickly and efficiently, covering large areas several times faster than conventional land-based surveys including areas which would otherwise be inaccessible or unsafe on foot. Flying a drone outside, especially in congested built-up areas requires permission from the Civil Aviation Authority (CAA) and our GIS drone team is qualified and licensed in accordance to the Air Navigation Order (ANO) with a Permission for Commercial Operations (PFCO).

The GIS drone research team employs the latest UAVs to capture aerial data with high definition RGB and multispectral cameras. To help produce highly accurate models with centimetre accuracy, the drone team also makes use of GPS smart ground control points. Data captured by drone is then processed using cutting edge photogrammetry software. This allows for geo-referenced orthomosaics to be generated along with elevation and 3D models which can be used for a number of useful applications. One such example of a 3D model is shown below and is of the USW campus in Treforest which was processed using photogrammetry software comprising of over 4,000 individual photos captured by several drone flights. 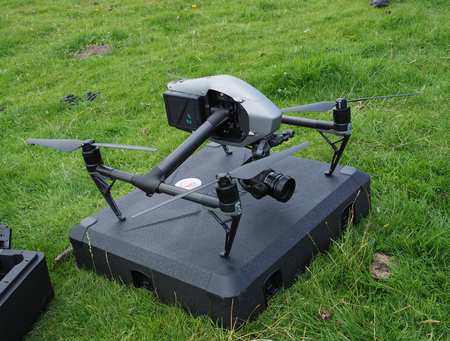 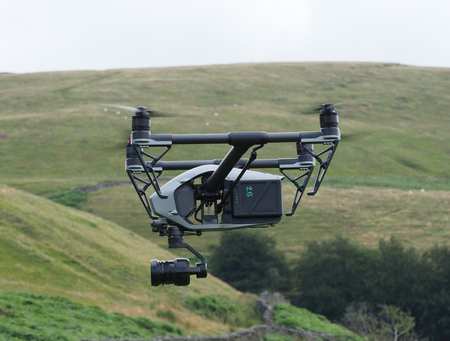 The GIS drone team is based within the Informatics division (Department of Computing and Maths) and is led by Dr. Nathan Thomas who is a qualified CAA commercial drone pilot along with fellow GIS specialists, Dr David Kidner and Dr Mark Ware who come from an established background in Geographical Information Systems over the last 25 years. More recently the GIS team have focused on various drone-based projects involving:

Recent landslides in the South Wales valleys due to unprecedented flooding has raised huge concerns over the safety and stability of slag heaps from previous mining operations. A new voluntary research project working with Rhondda Cynon Taff Council will help to monitor the rate of slippage of slag heap material on the mountain above Tylorstown using drones and high accuracy ground control points. The photo below is generated by combining over 500 individual images captured by drone which are then all stitched together to form one highly detailed orthomosaic image. 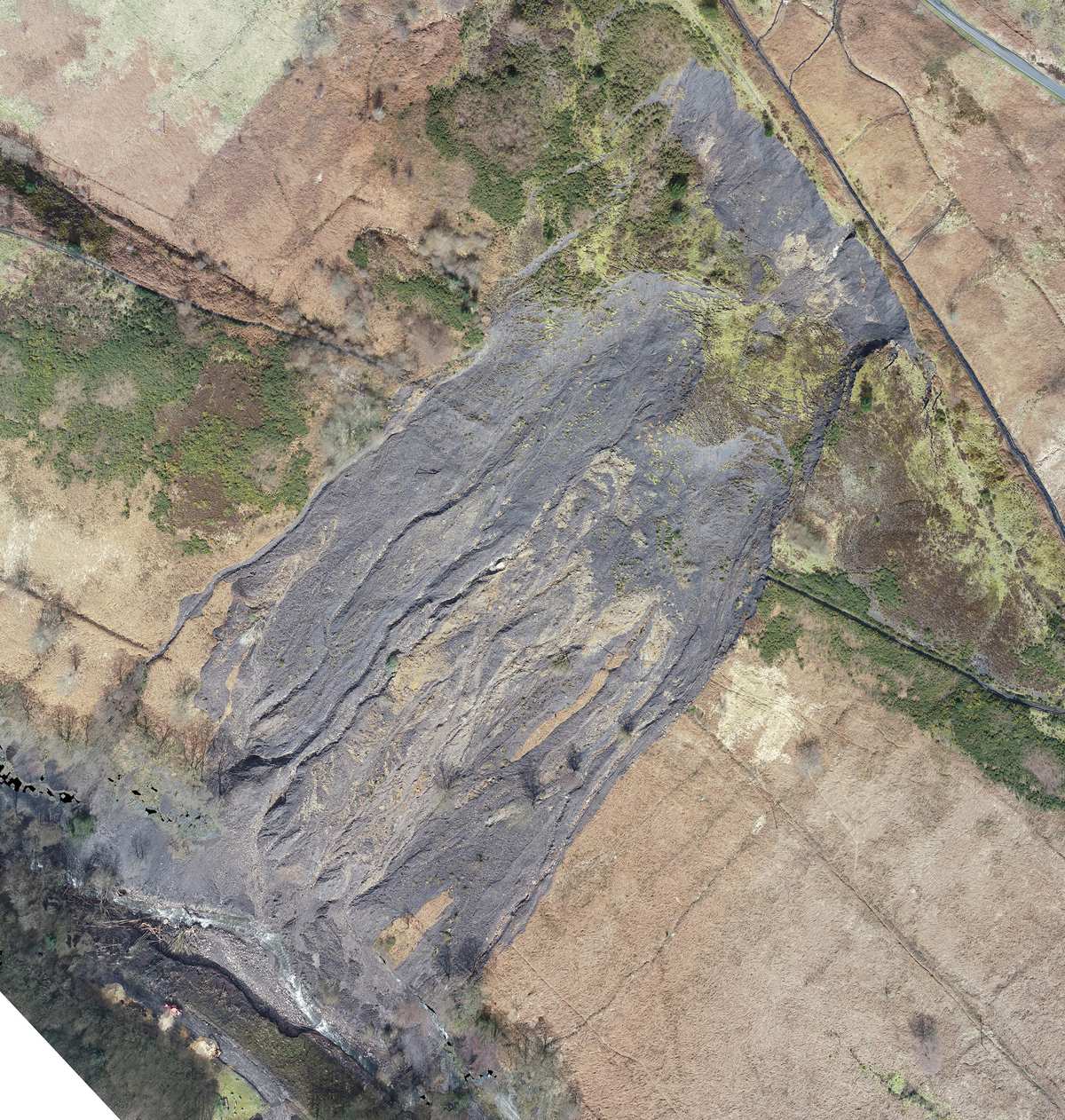 Orthomosaic image of the landslide over Tylorstown

Another output from the drone survey is an interactive 3D model which is derived from a highly detailed point cloud. This allows for a 'virtual' inspection of the landslide from any height; any angle and any direction. This can also be viewed via a VR headset.

The GIS drone research team has also been working closely with a charity funded project led by the Aberystruth Historical Society to help map 9000 years of Welsh history in the Blaenau Gwent Valley. The ‘Digital Archaeology for All’ project aims to bring 3D and Virtual Reality experiences to disabled children and adults. A major benefit is to make history inclusive for those who are unable to visit the various archaeology sites in person. The sites surveyed include the remains of a Bronze age dwelling; a 19th century mine and more recently the remains of a World War One firing range. 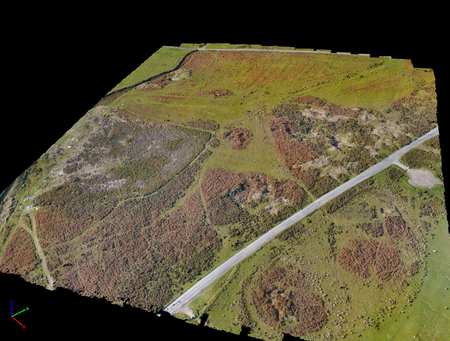 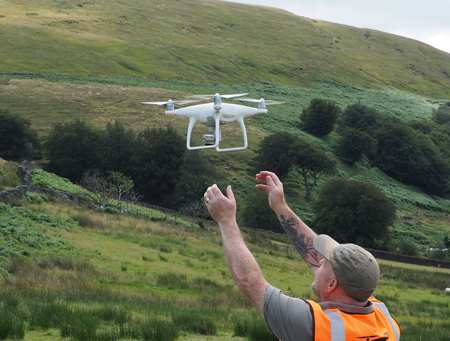 The Aberystruth history and archaeology (AHAS) has launched an ambitious project to survey and create a 3D interactive model of the Cwmcelyn valley. The valley is three miles long by two miles wide. The 3D surveying with be done using drones with help from the GIS drone team at USW. Ian Fewings AHAS Secretary said, “this is a massive project that will help map some of the three hindered archaeological sites that have been found in the area. I would like to thank the GIS team and the Informatics department for their help and dedication to this project. Ian Fewings - Aberystruth Historical Society

Drones and the Monitoring of Fly Tipping, Land Scarring and Fire Breaks

Our GIS drone team has also worked with The Brecon Beacons National Trust to survey the problems associated with illegal fly tipping; land scarring (due to illegal quad biking) and to help establish fire breaks to protect local communities in and around Merthyr Common and Trelewis. 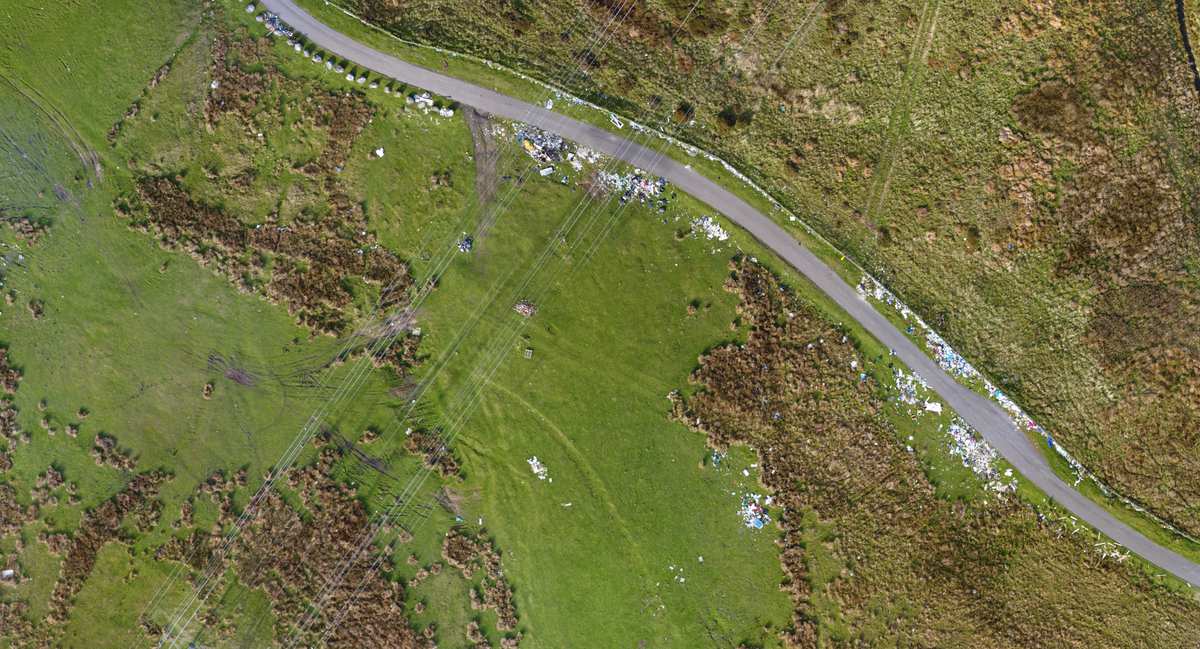 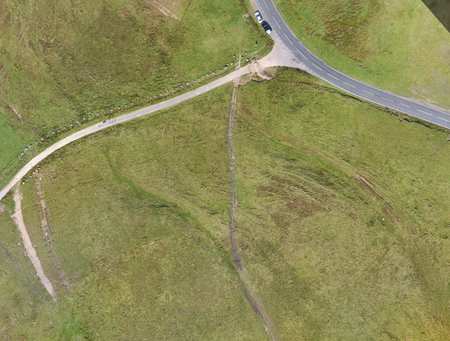 Drones and the Monitoring of Coastal Erosion

The GIS drone team along with a PhD project student is collaborating with the Vale of Glamorgan Council to survey and map the movement of material due to coastal erosion at Penarth cliff-face. 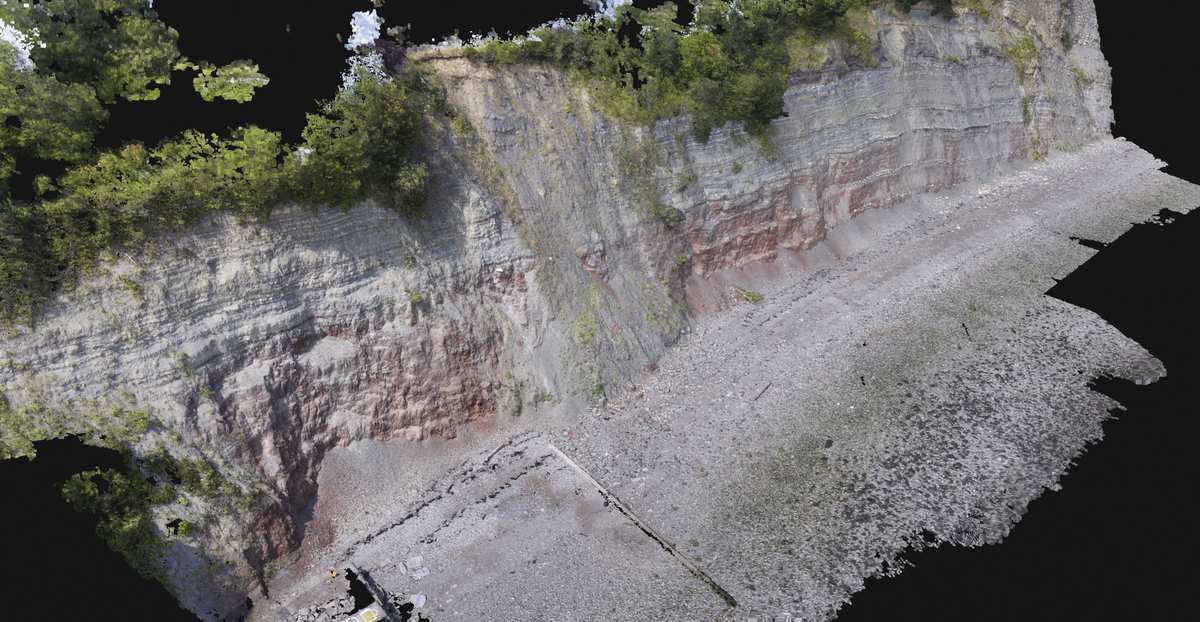 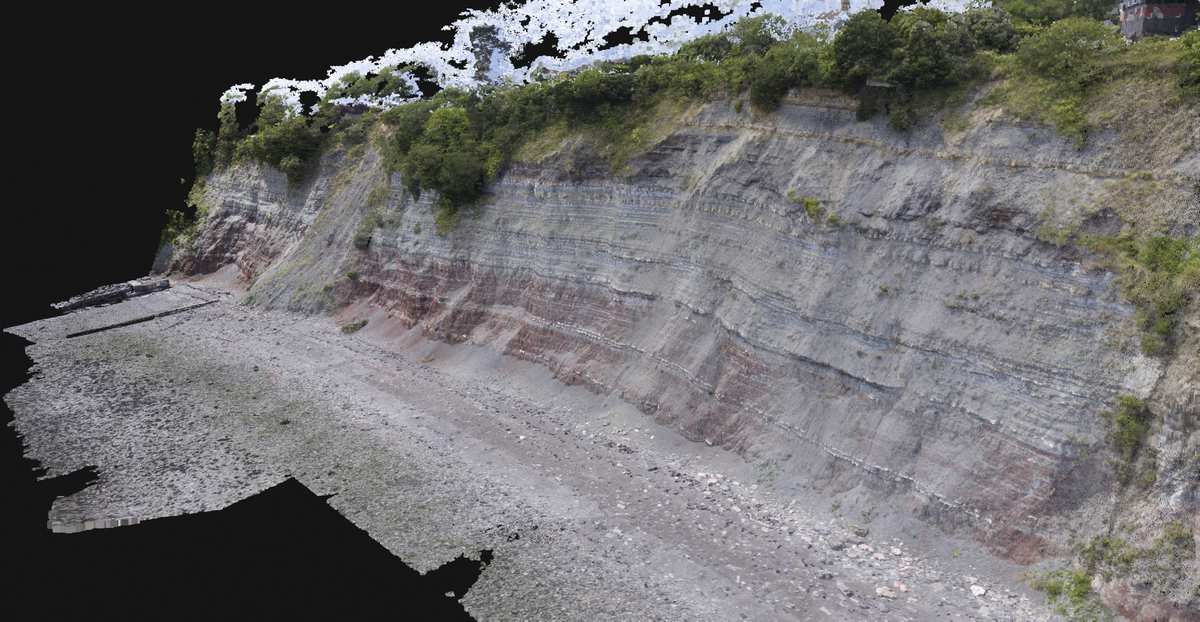 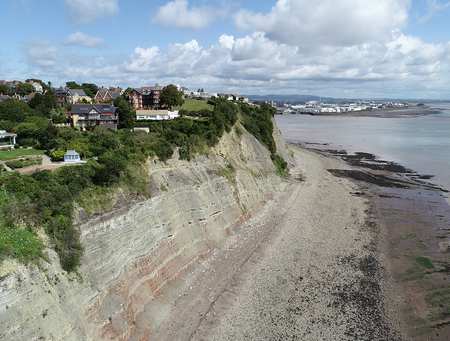 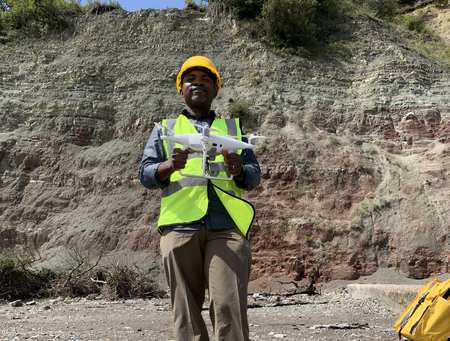 Japanese Knotweed is an invasive plant species which can cause structural damage to buildings and infrastructure where it can penetrate concrete foundations and even tarmac. It can grow more than a meter a month and costs the UK economy an estimated £165 million a year (2010) to control in urban areas. Identifying and controlling Japanese Knotweed has become a major priority in recent years especially on the impact of home devaluations. Surveying to ascertain if Japanese Knotweed is present within a specific area has traditionally been undertaken on foot. This can be time consuming and difficult if certain areas are not accessible or safe to traverse. A new solution in the monitoring of Japanese Knotweed is to use UAVs (drones) to survey and to photograph large areas of land from above. In order to achieve this we need to use multispectral cameras which not only capture normal visible RGB light, but they can also capture non visible light which is invisible to the human eye and this non visible light is key to identifying different species of plants such as Japanese Knotweed. 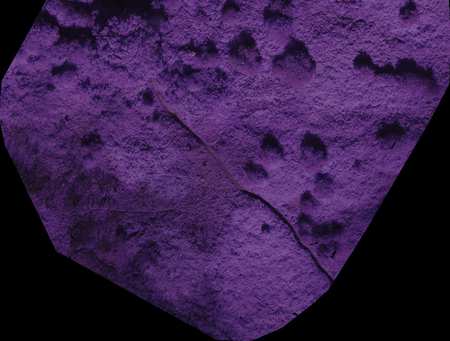 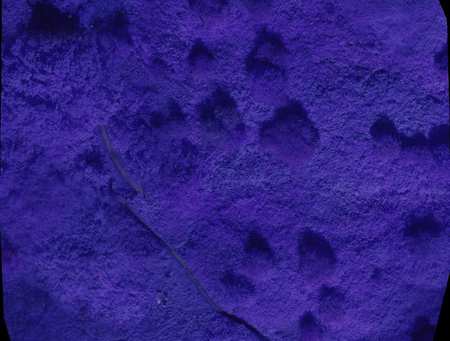 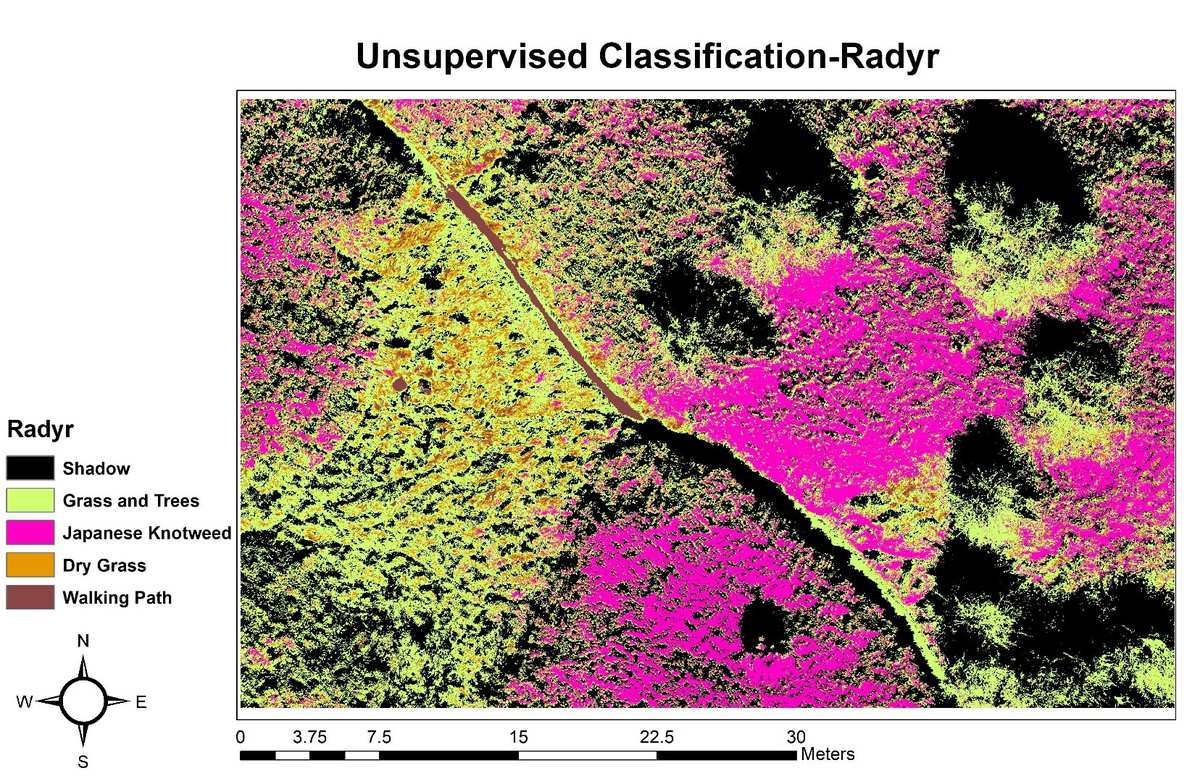 If you would like to collaborate with our GIS drone team and our GIS experts on a possible project please contact our GIS Research Unit within the Computing and Maths department.