Led by Professor Gary Higgs and Dr Mitch Langford, and supported by PhD students and post-doctoral research staff, the Accessibility Modelling and Spatial Inequalities team has engaged widely with academics from other institutions in addition to working with partners drawn from local and national government agencies and third sector organisations.

As part of its work examining geographical variation in a range of public and private services, the team has worked with organisations including Sport Wales, the Care and Social Services Inspectorate Wales, the Welsh Government’s Knowledge and Analytical Services and the Department for Economy, Skills and Natural Resources divisions, and Tenovus Cancer Care. There is also on-going collaboration with researchers based at the School of Earth and Environmental Sciences, University of Queensland, Australia in areas such as the use of GIS in crime mapping and emergency planning.

The group is primarily focussed on applying geographical information systems and advanced methods of spatial analyses to a broad range of practical application areas, in particular focussing on geographies of social inequality and seeking to measure and thereby improve our understanding of geographical accessibility to both public and private sector services. 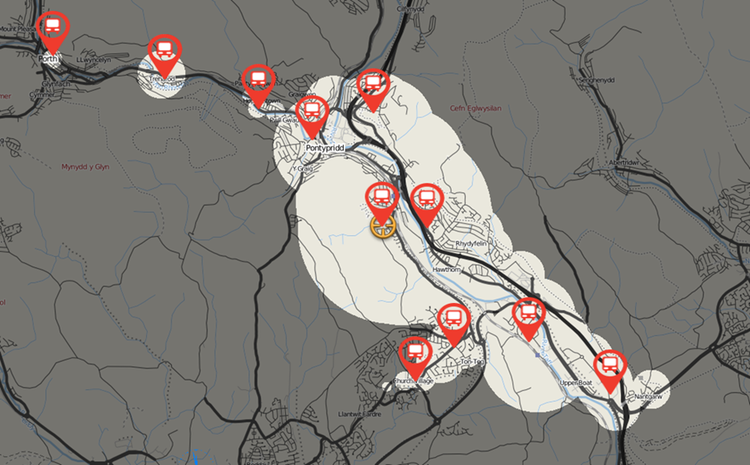 In addition to the applied research activities described elsewhere, members of this group are engaged in the theoretical development of spatial analytical techniques that underlay the quantitative assessment of services accessibility. Most notably, this has led to a modified methodology more finely tuned to analyse the accessibility of transport systems themselves, and specifically to bus-stops that form the vital point of entry to public bus services. Research has also led to the publication of an enhanced algorithm to extend the widely used enhanced two-step floating catchment area methodology so it is able to consider also those systems where more than one transport mode is operational, for example such as when the combined use of private cars, public buses, and cycling routes are all of interest. 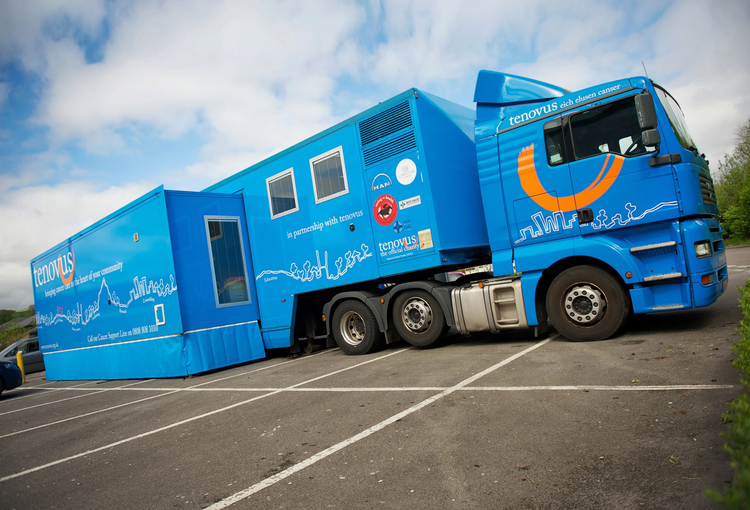 Professor Gary Higgs, Dr Mitch Langford, and KESS-funded PhD student Richard Williams have been working with partner Tenovus Cancer Care on research that seeks to optimise the locations of their mobile chemotherapy units. Open-source approaches have been used to demonstrate the application of such tools to planning the siting of mobile clinics to complement the provision of hospital-based cancer services in Wales. These sites can provide local services for those patients previously having to travel long distances to access their treatment. 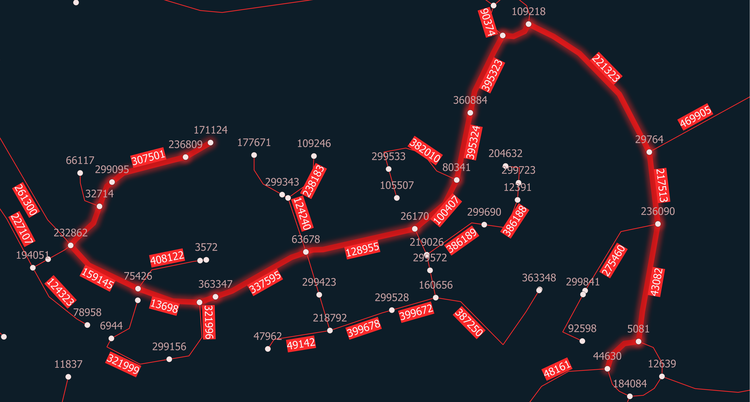 Innovative spatial analytical techniques based around the use of GIS-based network models are being used to reveal spatial and temporal variations in accessibility to services such as healthcare provision, post offices and public libraries, in relation to deprivation in Wales. For example, the analysis of geographical access to public libraries in Wales has produced novel and important findings. Levels of provision were estimated for two cross‐sections in time to gain an understanding of the potential implications of changes in service delivery models. Overall, levels of geographical accessibility to public library provision in Wales were found to have declined between 2011 and 2018, coinciding with notable reductions in public library funding over the same period. This research reveals spatial inequalities in provision with areas of declining provision often coinciding with pockets of greater economic deprivation.

Analytical techniques used to compute access to services rely heavily on the use of spatial databases and GIS technologies. For example, it requires the ability to model large and complex connected networks of roads along with associated attributes such as travel speeds and one-way restrictions. Each road segment is stored and tracked in a database through a unique identifier, along with all points of intersection (nodes).

Added to this are locations and attributes of demand populations (typically Census-derived population counts relating to particular cohorts of interest such as the elderly, those with limited access to a private car, the unemployed, etc.) and service delivery centres (including where available relevant supply-side parameters such as capacities, opening-hours, or range of facilities offered).

database in order to compute the network distance or estimated travel time between paired supply and demand locations. Outputs are combined to provide final scores for the levels of accessibility likely to be experienced by local communities when the local supply configurations and the effects of competing demand centres are accounted for.

LANGFORD, M. and HIGGS, G. (2013) Investigating the validity of rural-urban distinctions in the impacts of changing service provision: The example of postal service reconfiguration in Wales. Geoforum. 47, 53 - 64.

LANGFORD, M. and HIGGS, G. (2010) Accessibility and public service provision: Evaluating the impacts of the Post Office Network Change Programme in the UK. Transactions of the Institute of British Geographers, 35, 4, 585-501.

The geography of volunteering and social capital 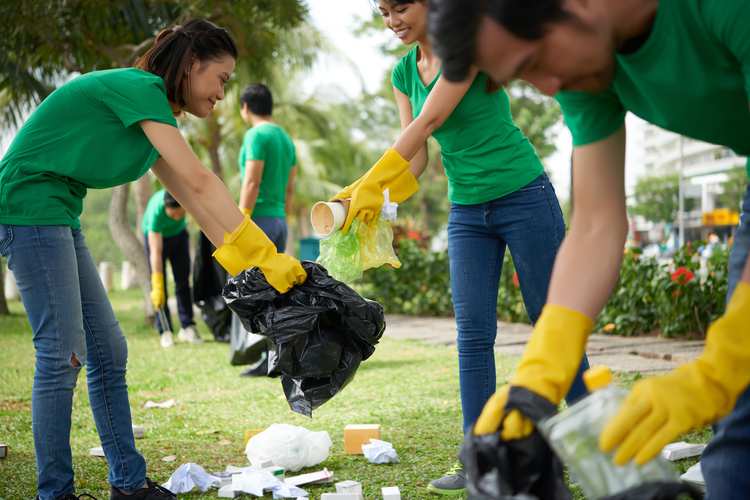 Research funded by the ESRC through the WISERD Civil Society initiative has involved the use of quantitative techniques to measure small area variations in the volunteering base, and possible associations with variations in proxy measures of social capital. Most recently this has involved a study of the respective importance of compositional (individual) and contextual (neighbourhood) factors associated with the propensity to engage in formal volunteering among a nationally representative sample of adults in Wales.

Regarding small area measures of social capital, the potential of several data sources has been investigated and associations sought between spatial trends in these data sets and measures such as the Welsh Index of Multiple Deprivation (WIMD) and other indicators of socio-economic circumstances. Research is on-going to examine potential relationships between the volunteering base in Wales and trends in access to those services which are reliant upon volunteering inputs to varying degrees.

PAGE, N., HIGGS, G. and LANGFORD, M. (2018) An exploratory analysis of spatial variations in organ donation registration rates in the five years prior to implementation of the Human Transplantation (Wales) Act 2013, Health and Place, 52, 18-24. 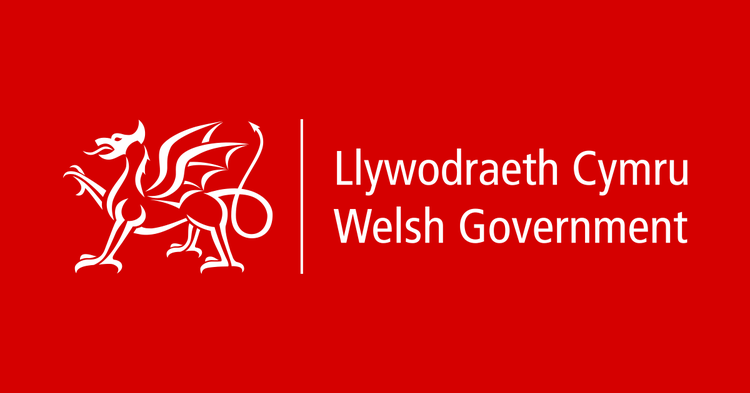 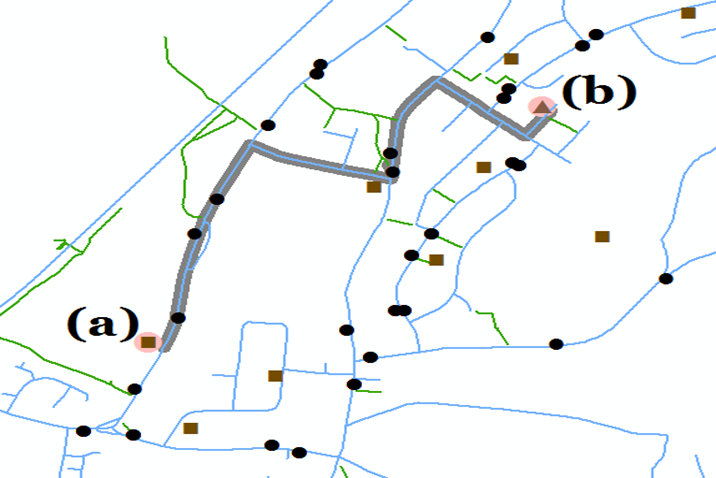 This research seeks to investigate the potential implications of adopting floating catchment area (FCA) approaches to measuring spatial accessibility within an existing IMD framework. FCA-derived accessibility scores have been substituted for existing measures to evaluate their potential impacts on the Welsh Index of Multiple Deprivation (WIMD). The findings to date have been shared with the Welsh Government, ensuring close synergy between WISERD scientific impact and policy impact outside academia. 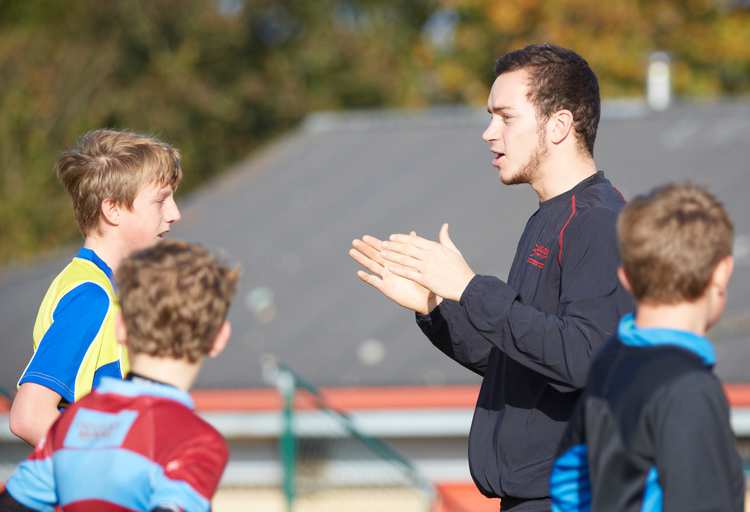 The availability of sports facilities has been shown to be one of the primary influences on participation in a range of sports. In partnership with Sport Wales, our research is applying innovative methods to measure spatial variations in the location and quality of sporting infrastructure and analyse the implications of potential changes in the configuration of facilities such as leisure centres, swimming pools and outdoor recreation centres. 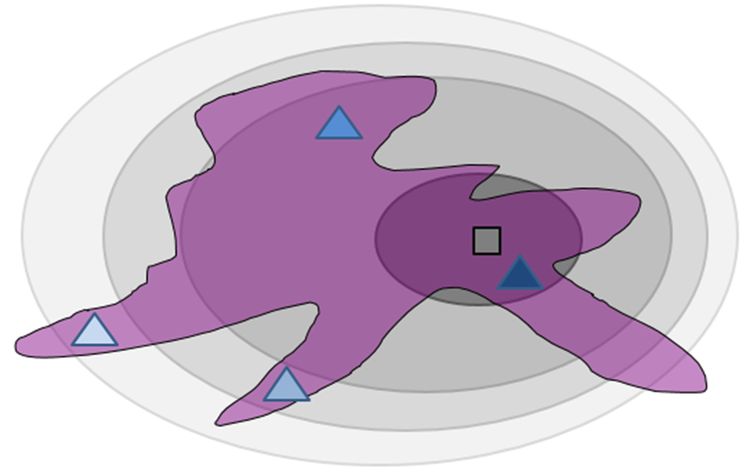 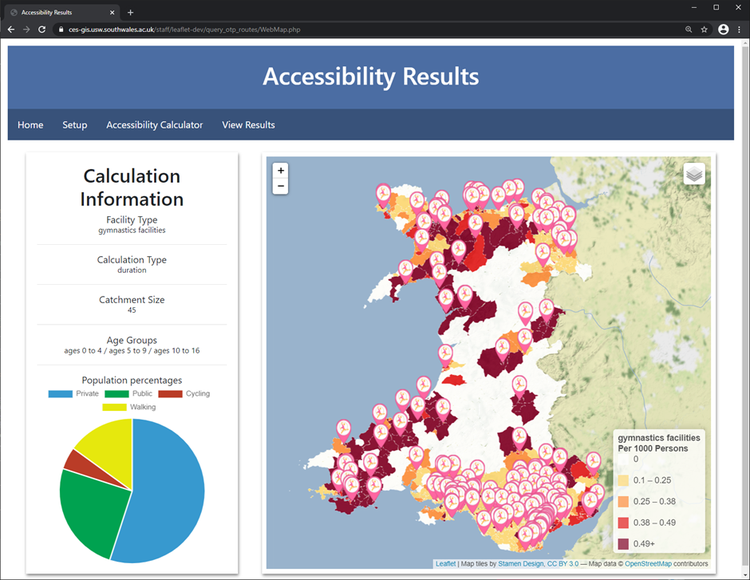 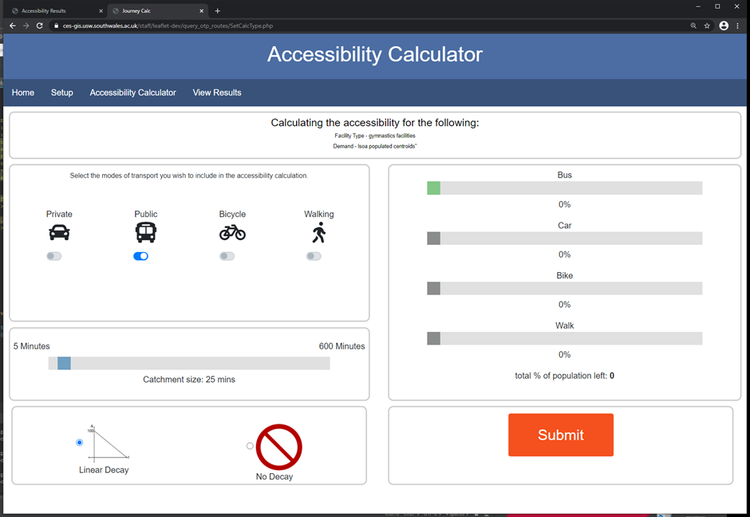 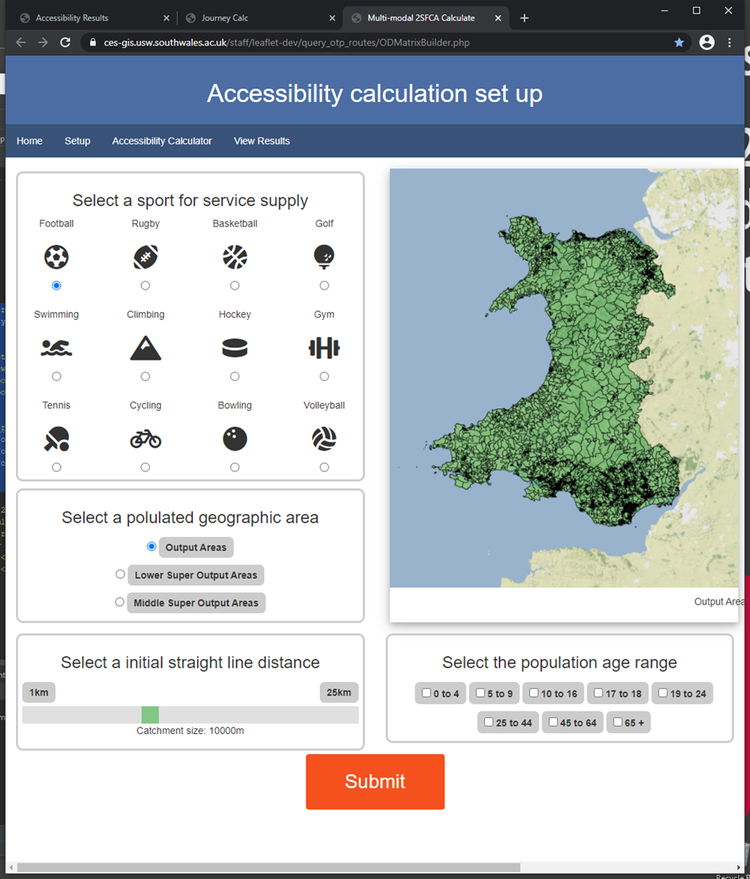 PRICE, A., LANGFORD, M., HIGGS, G. and RADCLIFFE J. (2020) The design and development of a client-server based tool to compute accessibility to sporting facilities in Wales.Presented at GIS Research UK conference, July 2020. Birkbeck University/UCL

Studying the provision of retail banking in Wales 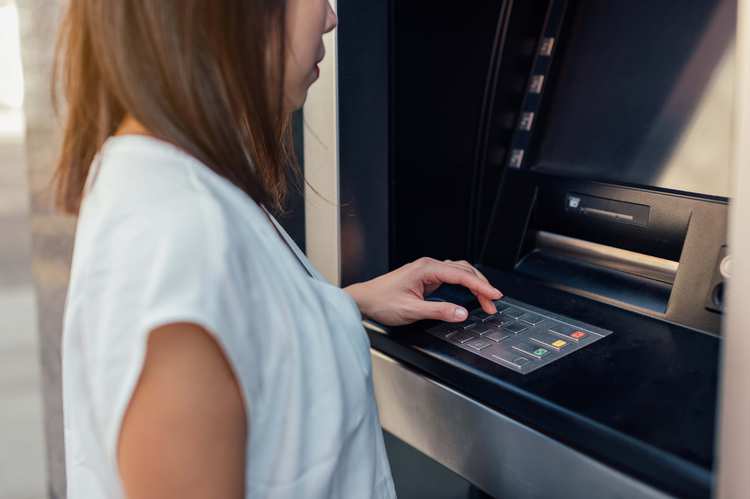 This research has been undertaken by Dr Mitch Langford whilst appointed as an Academic Fellow of the Senedd Commission to work on "Exploring geographical patterns in the changing landscape of financial services provision in Wales".

It has applied advanced spatial analysis techniques and spatial database queries to better map the recent, rapid, and on-going declines in the provision of high street banks, building societies and other facilities associated with access to personal banking services.

This work allows an examination of these on-going structural changes at a hitherto unobtainable geographical scale, leading to a better understanding of the potential impacts experienced by local communities and businesses across Wales. 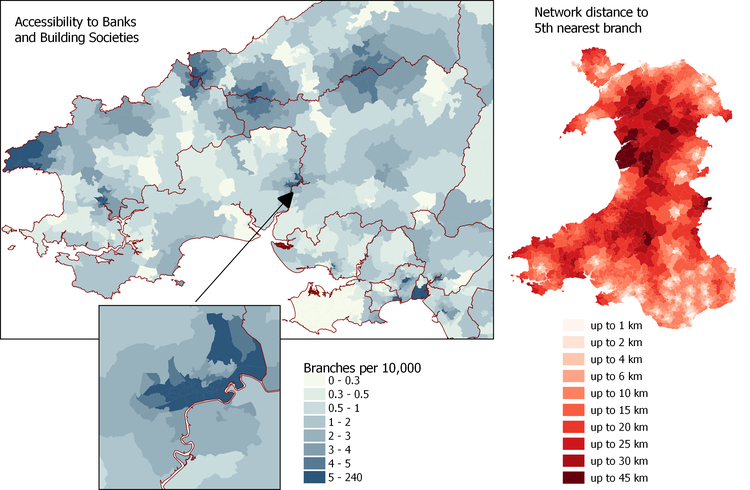 Mapping and modelling the spatial distribution of childcare provision 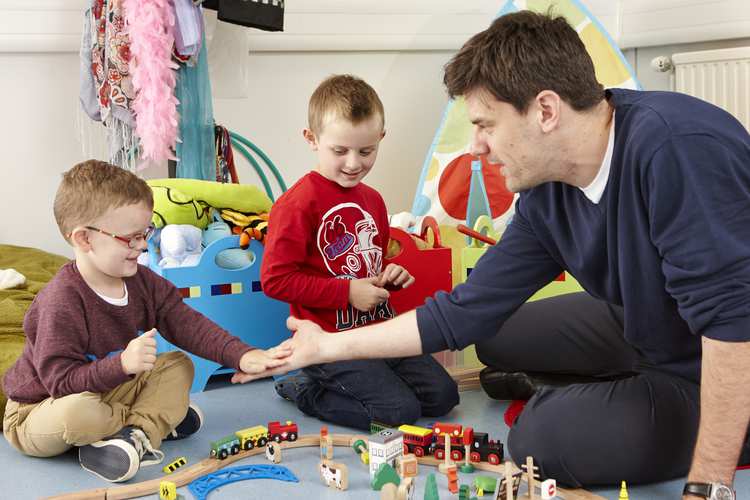 This research was undertaken on behalf of the Care Inspectorate Wales, a division of the Welsh Government. Its aim was to help in the development and implementation of policy relating to an election manifesto pledge to provide early education and childcare for all working parents in Wales.

Its outputs have provided critical insights into the spatially complex supply-to-demand patterns relating to childcare provision across Wales, and the maps produced were used by decision-makers to visualise the distribution of potential demand for childcare placements in comparison to current spatial availability of childcare services. This work was taken up by the Welsh Government and used to guide the choice of pilot studies that informed the roll out of the full childcare offer.

Wales Institute of Social and Economic Research and Data

If you have any questions about our research or would like to collaborate with us, please contact Professor Gary Higgs.

We welcome UK and international applications from suitably qualified graduates interested in joining us for either Masters by Research or PhD research programmes. We particularly encourage applications from candidates that hold a degree at graduate or Masters level in computer science, Geographical Information Science, data science, informatics, or Geography with significant quantitative elements.

Find out more on the Graduate School website or contact Professor Gary Higgs for an informal discussion. 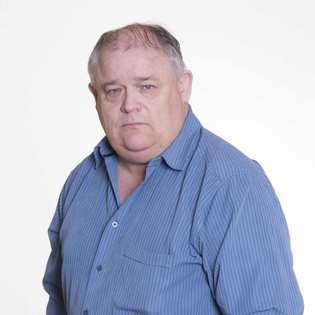 Professor Gary Higgs is the Director of the GIS Research Centre. Since 2008, he has served as a Co-Director of the Wales Institute of Social and Economic Research, Data and Methods (WISERD). His over-arching research interests are in the application of GIS in social and environmental studies, most recently in the areas of health geography, environmental justice, and emergency planning. Professor Higgs is an Editorial Board Member for the International Journal of Health Geographics and a Senior Fellow of ESRC's National Centre for Research Methods (NCRM). 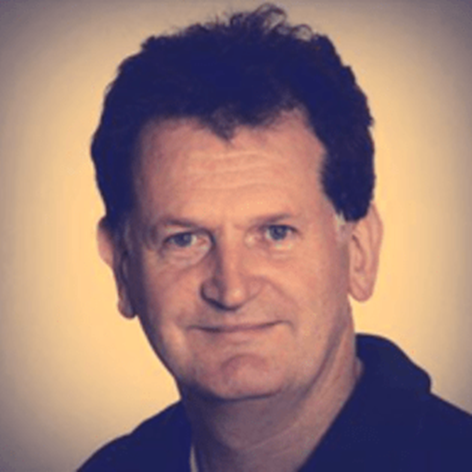 Dr Mitch Langford is an Associate Professor with research interests in the fields of computational geography and geoinformatics. He is an active member of the Wales Institute of Social and Economic Research, Data and Methods (WISERD). Mitch has longstanding research interests and publications in: dasymetric mapping, small-area population modelling, geospatial analysis in the fields of healthcare, social inequality and environmental justice. Mitch was appointed an Academic Fellow of the Senedd Commission (the Senedd/Welsh Parliament’s corporate body) in 2020 to work on "Exploring geographical patterns in the changing landscape of financial services provision in Wales".

Andrew is our senior research assistant on the ESRC-funded WISERD Civil Society initiative. He is engaged in the delivery of Work Package 2.1 'Inequalities, civic loss and well-being' led by Professor Gary Higgs and Dr Mitch Langford.

Liam Web, who graduated from USW with first-class Honours in Information Communication Technology at the University of Wales, is a MPhil/PhD research student, with a working title of "Using web-based technologies to better understand and present temporal variations in access to public services".